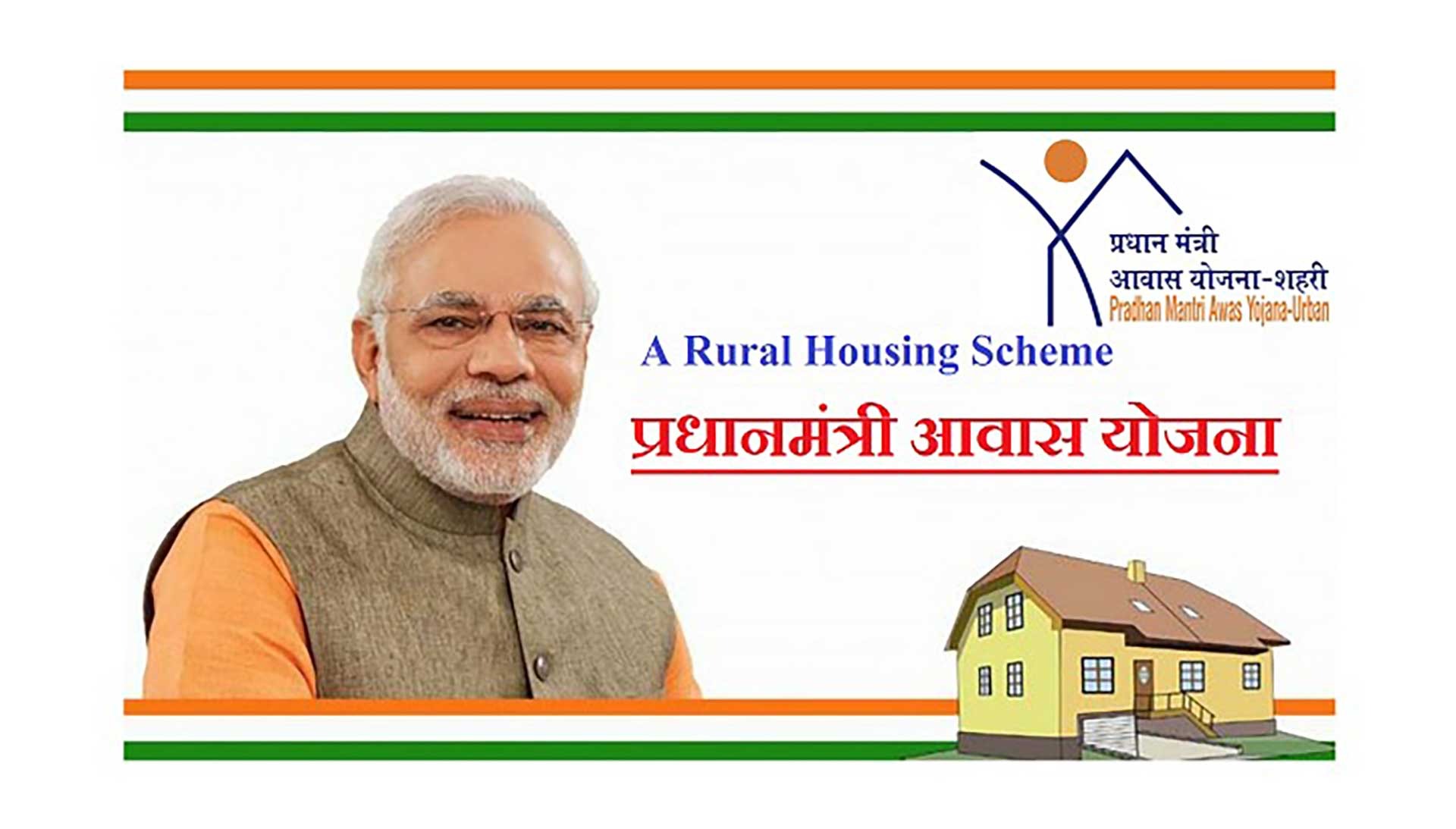 The Pradhan Mantri Awas Yojana (PMAY) scheme was launched in June 2015 by Prime Minister Shri Narendra Modi. The Government of India introduced this scheme to boost the affordability of houses against an inflated real estate sector. It aims to achieve its objective of "Housing for All" by 31 March 2022, the 150th birth anniversary year of Mahatma Gandhi, by constructing 20 million houses across the nation.  This was brought by the Ministry of Housing and Urban Poverty Alleviation (MoHUPA), aiming to provide an affordable, concrete or "pucca" house for the urban poor, which includes slum dwellers and members of economically weaker sections, low and middle-income groups (LIG and MIG).  Such applicants can benefit from credit-linked subsidies and become homeowners by paying subsidized interest rates against their home loans. Here's all you need to know about the scope, coverage, and construction of homes under Pradhan Mantri Awas Yojana – Urban. According to the basis of the areas that it caters to, this Yojana has two parts - Urban and Gramin.

PMAY-U is also known as Pradhan Mantri Awas Yojana Urban. Currently, the PMAY-U has approximately 4300 such townships and cities under this scheme. It also covers urban development authority, special area development authority, industrial development authority, development area, notified planning, and all such authorities responsible for urban planning and regulations.    The scheme will advance in the succeeding 3 phases:    Phase 1. To incorporate 100 cities in picked states and UTs between the time span of April 2015 to March 2017.  Phase 2. To incorporate 200 new cities between April 2017 to March 2019.  Phase 3. To reach the remaining cities between April 2019 to March 2022.    The Ministry of Housing and Urban Affairs said on 1 July 2019, the progress of PMAY-U in all states and union territories was of nearly 26 lakhs completed houses, out of which almost 24 lakh houses were occupied in the totality of a massive 83.63 lakh sanctioned houses.   The data also portrays a total budget of Rs. 4,95,838 Crore, out of which Rs. 51,414.5 crores of funds have been issued.

Indira Awas Yojana, which was renamed in March 2016 as The Pradhan Mantri Awas Yojana Gramin (PMAY-G), targets promoting approachability and affordability of housing for all of rural India, with the exceptions of Delhi and Chandigarh. Essentially to provide financial assistance to the homeless and those residing in decrepit houses and to aid them in the construction of pucca houses. Beneficiaries living in plains can get up to Rs. 1.2 Lakh and those in North-Eastern, hilly areas, Integrated Action Plan (IAP), and difficult areas can avail up to Rs. 1.3 Lakh owing to this housing endeavor. Until now, data obtainable from the Ministry of Rural Development, 1 03,01,107 residences have been sanctioned in all states and UTs. PMAY is an excellent effort by the GOI to promote purchases in the real estate sector. The cost of housing construction will be shared between the Central and State government in a 64:40 ratio for plain regions and a 90:10 ratio for North-Eastern and hilly areas. Identification of beneficiaries of the PMAY scheme from the Socio-Economic and Caste Census (SECC) will include scheduled castes and scheduled tribes along with Non-SC/ST and minorities under BPL. Moreover, Freed bonded laborers with next of kin and widows of paramilitary forces and individuals killed in action, ex-servicemen, and those under a retirement scheme.

I. Credit Linked Subsidy Scheme (CLSS)
The CLSS offers subsidies on home loan interest rates to those qualified for this scheme. The PMAY subsidy rate, subsidy amount, maximum loan amount, and other details have been mentioned below:
Home loans under the CLSS have a maximum tenor of 20 years. NPV or the net present value is evaluated at a discounted rate of 10% of the interest subsidy.
II. "In-situ" slum redevelopment (ISSR) using the land as a resource
The idea of the scheme is to rehabilitate slums with the land as a resource, with a partnership including private organizations to give houses to families living in such areas. The respective state or UT will only get to decide on the prices if there is a beneficiary contribution by them. If not, all the rates will be determined by the central government.
III. Affordable Housing in Partnership (AHP)
EWS families receive financial support of Rs.1.5 Lakh on behalf of the Central Government through the Affordable Housing in Partnership (AHP) scheme. The State and UTs can partner with their agencies or private sector to develop such housing projects.
IV. Individual house construction or enhancement led by beneficiaries
One of the main features of PM Awas Yojana is to target EWS families who cannot avail the benefits of the previous three components. Such beneficiaries will avail monetary aid from the Central Government of up to Rs. 1.5 Lakh that can be utilized to fund the construction of a residence or to improve a current one.

The mission "Housing for All'' in the urban area has been implemented with effect from 17.06.2015 to provide central support to executing agencies. The CLSS is being offered under this mission. The Middle Income Group(MIG) interest subsidy will be provided on housing loans for the purchase/building of houses (including repurchase). For the Economically Weaker Section(EWS) and Lower Income Group(LIG), the interest subsidy will be given on housing loans for the purchase, building of a house. The Credit Linked subsidy would also be available for home loans availed for new construction and addition of rooms, kitchen, toilet, etc., to existing dwellings as incremental housing. The interest subsidy benefit will be upfront on the principal outstanding, and the availability and amount of interest subsidy are subject to meeting income criteria as per various categories under the scheme.

• Husband, wife, unmarried sons, and/or unmarried daughters everyone will be included in the beneficiary family • Any member who is 18 and above who is currently earning can be treated as a separate household.

Yes, If you are already an existing home loan borrower, you are still eligible for this scheme if you fulfill all the relevant eligibility criteria. The uniquely launched Pradhan Mantri Yojana has played a vital role in providing affordable housing. Aside from making housing accessible and affordable to all, irrespective of their financial stability, it has also created ample job opportunities in the real estate sector. A staggering 6.07 crore jobs were created with the inclusion of RERA and this scheme.

There are two possible ways beneficiaries can apply for PMAY. Firstly through the official website online. Alternatively, you can also apply through CSC outlets.
A. Online
You can visit the official website of the scheme to apply online. All you need to have is a valid Aadhaar Card to register yourself. Website: https://pmaymis.gov.in/
B. Offline
Alternatively, you can apply for the scheme offline by filling up a form available through the Common Service Centre (CSC). This requires a minimal cost of Rs. 25 for the form. (GST will be applicable)

How do I check my name in the PMAY 2021 Beneficiary List?

Those qualified for the scheme can review their name in the Pradhan Mantri Awas Yojana list by following these few steps:

Who are all eligible for Pradhan Manti Awas Yojana?

The following individuals and families are eligible for this scheme:

In addition to the above, beneficiaries can avail the benefits of this scheme by meeting the following few eligibility criteria -

• He/she must not own a house to fulfill the Pradhan Mantri Awas Yojana eligibility.
• The individual must also not avail the benefits of any other housing scheme by the State or Central Government.

The Union Cabinet approves the extension of PMAY-Urban till Dec 2024.

The Union Cabinet has approved the continuation of the Pradhan Mantri Awas Yojana (Urban) till December, 2024. Pradhan Mantri Awas Yojana (Urban) started from June 2015 and till March 31, 2023. When the subsidy scheme was closed, according to the government, a subsidy of Rs. 122.69 lakh was sanctioned. Based on the request of the States and Union Territories, the Union Cabinet, chaired by Prime Minister Narendra Modi, decided to extend the implementation period of PMAY-Urban till December 31, 2024, as per the information we have received. We are waiting for the final update from the central government regarding from which date it will be effective. The guidelines will remain the same as in the previous circular. We have to wait until final approval from the government comes.